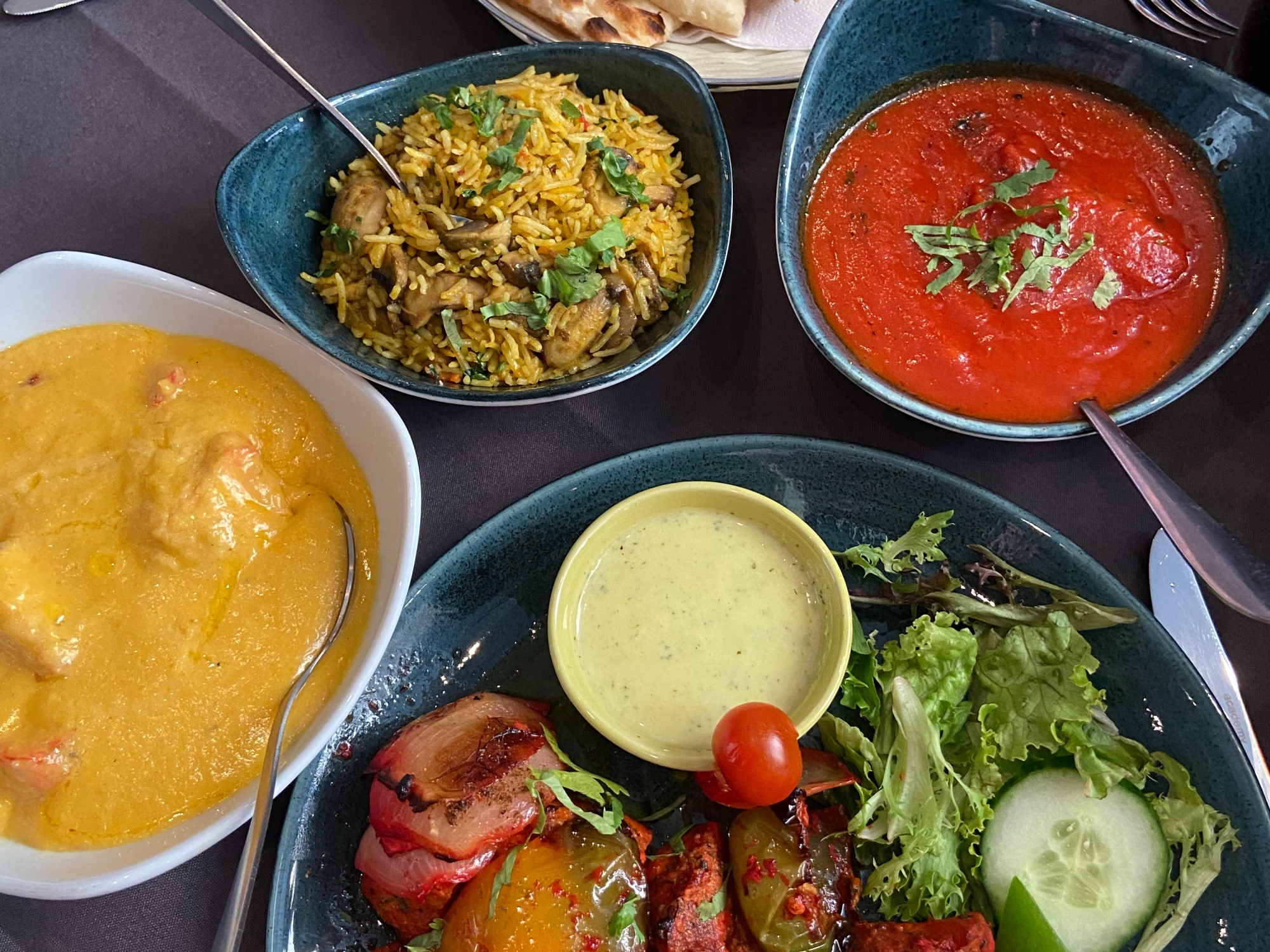 Before I visited Bo’ness Spice, I’d been operating under the illusion that Bo’ness was south of Edinburgh. Turns out, I was confusing it with Bonnyrigg…another place I haven’t been to! What is there to see in Bo’ness, do you ask?

I’ll get to the part where I tell you how gorgeous Bo’ness as a town is, but before that: the food. My plan was to go to Bo’ness, eat and leave. I ate, then stayed to wander as it’s such a beautiful town. Bo’ness Spice opened in this lovely town after a refurbishment this year. The restaurant is tiny, seating only five tables – so it’s a recommendation to book as every table was filled and I could see the takeaway orders flying out the door too.

We were greeted by two lovely men when we arrived, and they were friendly, chatty and helpful throughout the meal. We started with some mixed pakora (chicken, vegetable and haggis) which was served with a dip and salad and the garlic mushrooms were served similarly. You’ll notice the vibrant colours and use of salad/herb garnish throughout the pictures – the food looked and smelled fantastic, so we were salivating before we even tasted it. Both were really tasty, but the garlic mushrooms in particular were gorgeous – I could eat them by the kilo!

My friend ordered the Butter Chicken which I had a little taste of – it’s not my preferred curry as it’s so mild, but that said it was really rich and comforting.

The sun was shining and as we walked towards the restaurant I could smell that wonderful marinated/grilled meat smell and I knew I had to have something like that – it was an entire mood. My order absolutely hit the nail on the head – the flavour was absolutely gorgeous – not just the spices on the chicken, but the charring on the vegetables too. It was served with salad and mint sauce, so it was a really fresh and light dish.

I was advised to add a sauce on to my main as it could be a little bit dry. In all honesty, with the mint sauce, grilled vegetables and salad it was really nice and didn’t feel too dry at all. That said: the Chasni sauce was absolutely delicious and now that I’ve tasted it, I would have to recommend it to everyone. I love most curries and usually it’s the level of spice that stops me ordering certain ones as I’m burnt out after a few bites. All Indian food is flavourful, but the Chasni and Masala sauces are my go-to for mild/medium spice, but maximum flavour. I will absolutely order this again. We ordered some peshwari naan for the table which was absolutely necessary for mopping up the sauce!

After an Indian meal – especially when you’ve double-carbed with rice and naan bread, it would be smart to go for a walk and aid your digestion before sitting in the car to go home. We wandered down to the old docks which boast amazing views over the Firth of Forth to see the silhouette of the Grangemouth Refinery. From the docks we noticed some beautiful buildings, so we ventured up to have a look

We met a lovely local man who was telling us about the Bo’ness Fair Festival which engulfs the town every year – everyone from the local council, the primary schools and most of the town residents decorate their gardens. They crown a queen every year, and a massive fuss is made. It’s a fantastic day by the sounds of it! Let’s just say I’ll be going for a Bo’ness Spice around about that time next year to see the town decorated with banners, themed garden displays and floats!